Thank you for being a patron of the Arts at WKU!

We rely entirely on ticket income to produce our shows. We do not receive any fees or budgeted finacial support from WKU to make it all happen. Your ticket helps pay for sets, costumes, makeup, lighting, sound, musicians, and performance rights. We truly appreciate your support! 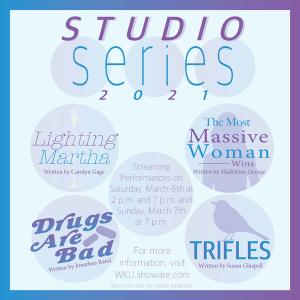 Turn off the ghost light, the show must go on!  This March, we offer streaming performances of four one-act plays directed, acted, and designed by our amazing WKU Theatre & Dance students. Join us for an evening filled with teenage angst, self-reflection, grief, love, and murder. Recommended for mature audiences.

Lighting Martha by Carolyn Gage  (Directed by Baylee Hayes)
What happens when your love dies? Does the light go out of the world? Lighting Martha shows us how one woman deals with the death of her secret lover.  Will she be able to accept the loss, or will she will be forever haunted by what once was?

The Most Massive Woman Wins by Madeleine George  (Directed by Audrey Plescia)
Striking, hilarious, and brazenly eye-opening, this show features four distinct women brought together at a liposuction clinic. Through childhood memories, personal narratives, and children’s rhymes, these women share the reality behind unrealistic expectations for women’s bodies, minds, and spirits.

Drugs Are Bad by Jonathan Rand (Directed by Rachael Prewitt)
Have you ever wondered what life would be like with parents who encourage drug-taking and sex-having?  Find out in this parody of those ever-so-dramatic Afterschool Specials, as young Brad rebels by winning scholarships and drinking milk.

Trifles by Susan Glaspell  (Directed by Hope Mohon)
Murder is no trifling matter when this small Iowa town is shocked by the death of local farmer John Wright. Will our male investigators see beyond their own prejudices to discover the truth? Or will Mrs. Wright’s secrets remain hidden?

Air Dates and Tickets Available at Links Below:

Price: $10  (You must preorder your ticket in advance of the performance you wish to view. )